Friends of mine, expecting at the time like my wife and I, alerted me to the fact that Ontario has a publicly available dataset of first names registered in the province since 1917 (male and female). The data are in pretty good shape and it isn’t hard to go from downloading to analyzing. Because they are legit scientists, my friends used these data to identify a pool of potential names for their little one that met a bunch of specific criteria like recent popularity, etc. I fiddled around with the dataset looking for inspiration but we knew what we were having and had a pretty good idea already what names were the frontrunners, so these data didn’t end up being all that personally useful. It is interesting to look at more general trends, though! I started by taking a look at significant names in my family. In order to appear in the dataset names have to have a minimum of five registrations in a given year, and so there are some names I’m not able to plot because they don’t show up (looking at you, Colum and Joachim). But most other names meet at least the minimum threshold for most years in the dataset. Let’s start with the ladies: 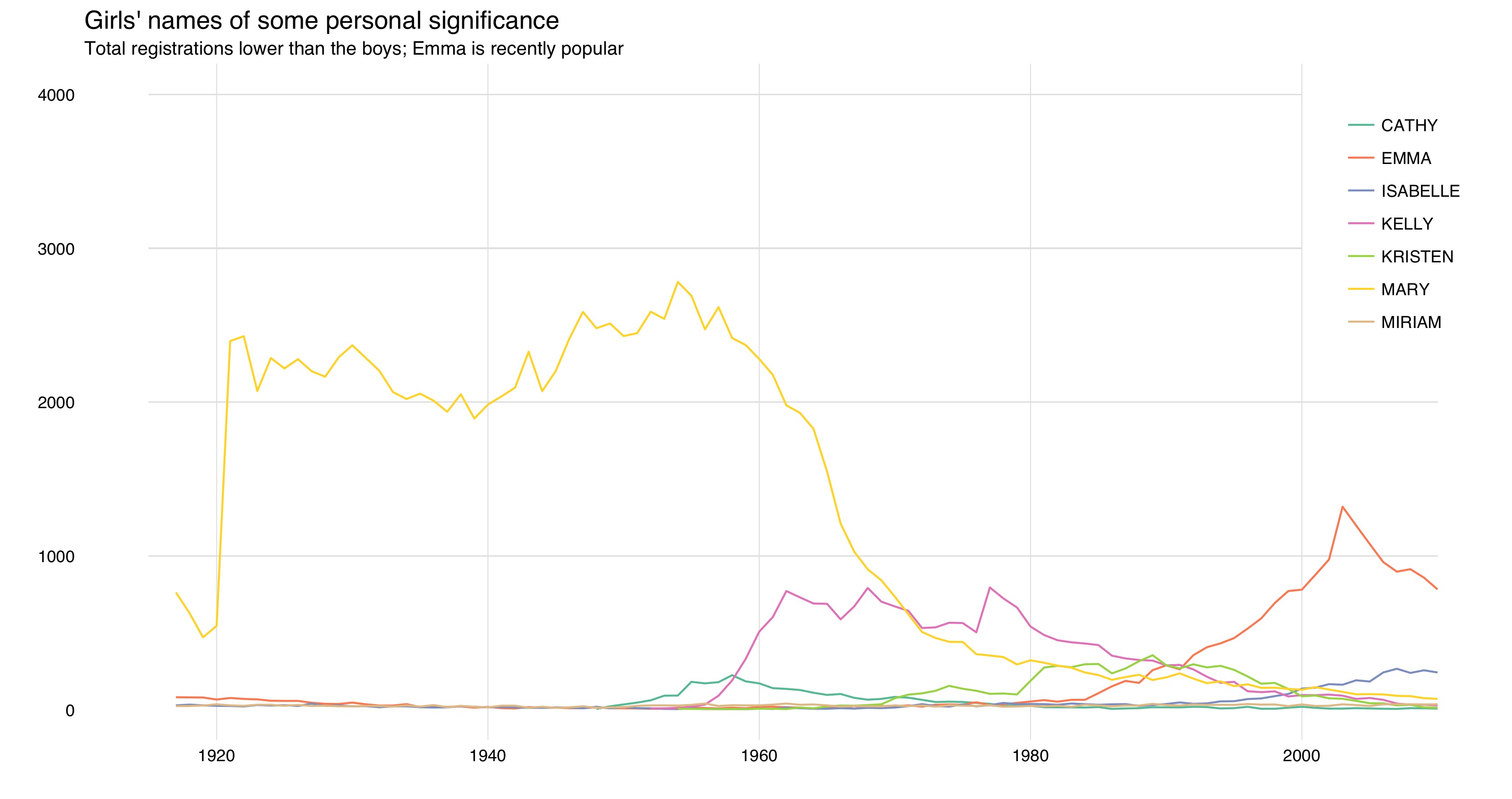 Each line represents a different name of some significance. Mary dominated the field until about 1960, when the name saw a sharp drop in popularity. Kelly picked up around the same time and stayed fairly popular until 1990, but is now far less popular than I would have guessed. Emma and Isabelle have both seen significant gains in recent years, though Emma’s peak as a popular girls’ name was reached in the early aughts. I was surprised by how unpopular Cathy has been until I realized that I probably wasn’t capturing the variation in spelling, so I took a look a more careful look at alternative Cathys in the next plot: 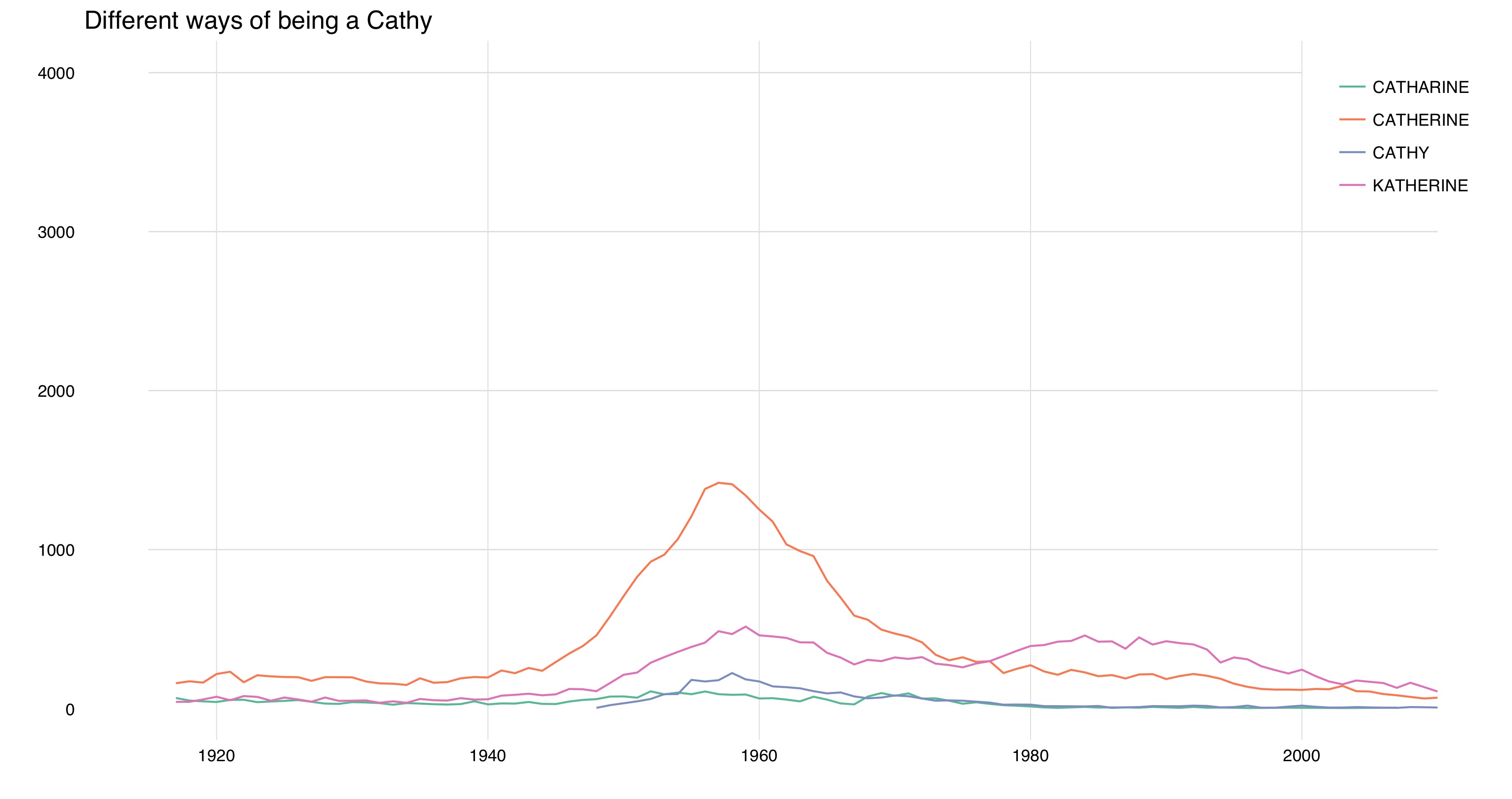 It looks like Cathy as a unique spelling only shows up in the late 40s, and the most popular variation was Catherine until the late 70s when the K came to prominence.

What about boys’ names? 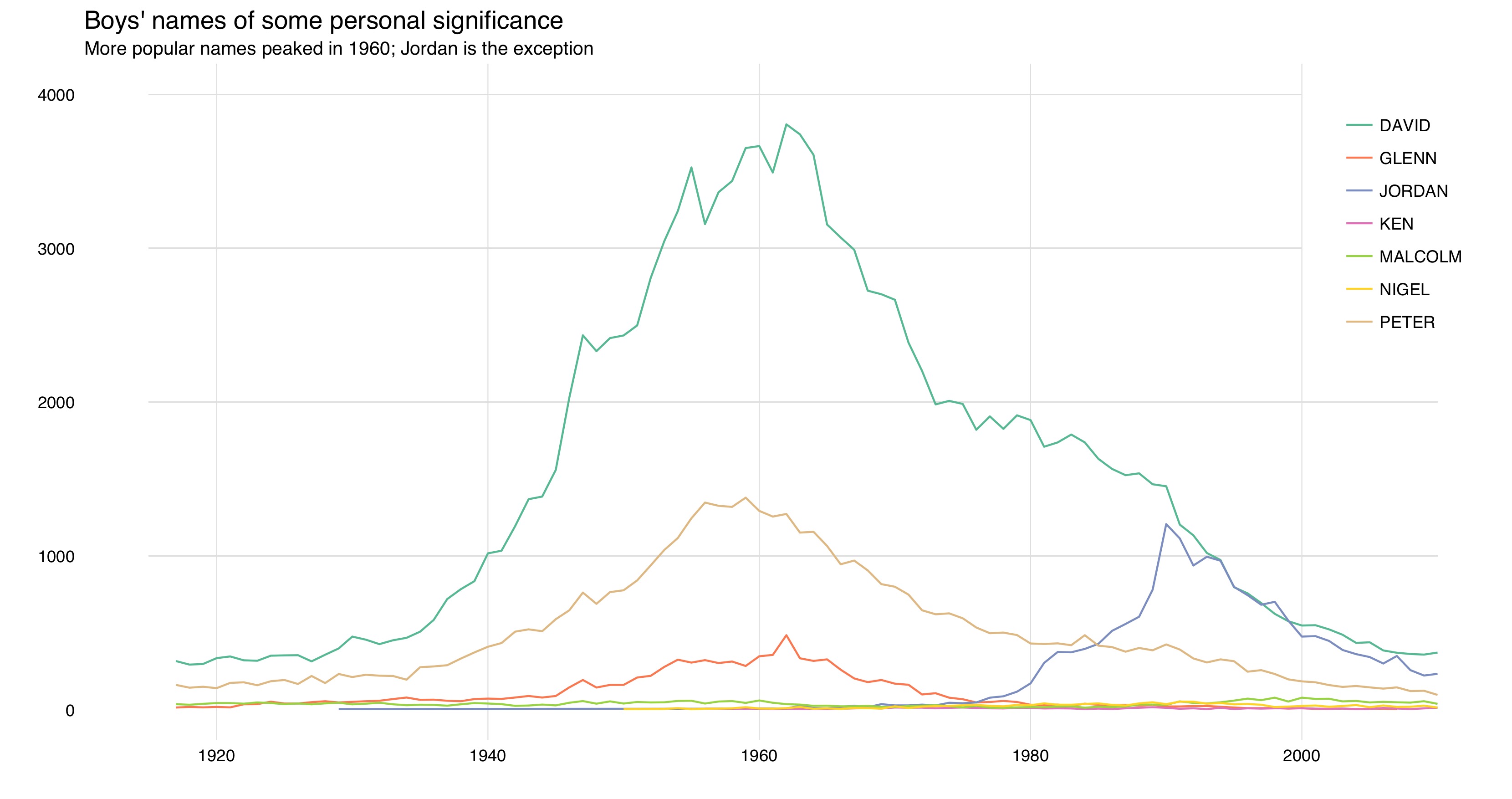 Historically, my name is quite popular: there were 3805 Davids registered in Ontario in 1962! Peter was also pretty common around the same time, and more recently Jordan shows some strong numbers. Let’s give some of the more popular names in the above plot some interactivity:

It’s interesting that after peaks in popularity around 1960, all of the boys and girls names we’ve seen so far show fewer total registrations as we get closer to the present day. The general increase in registrations for a given name until 1960 is likely driven, in part at least, by the birthrate; this seems to be the case when we take a look at the total number of babies being registered each year: 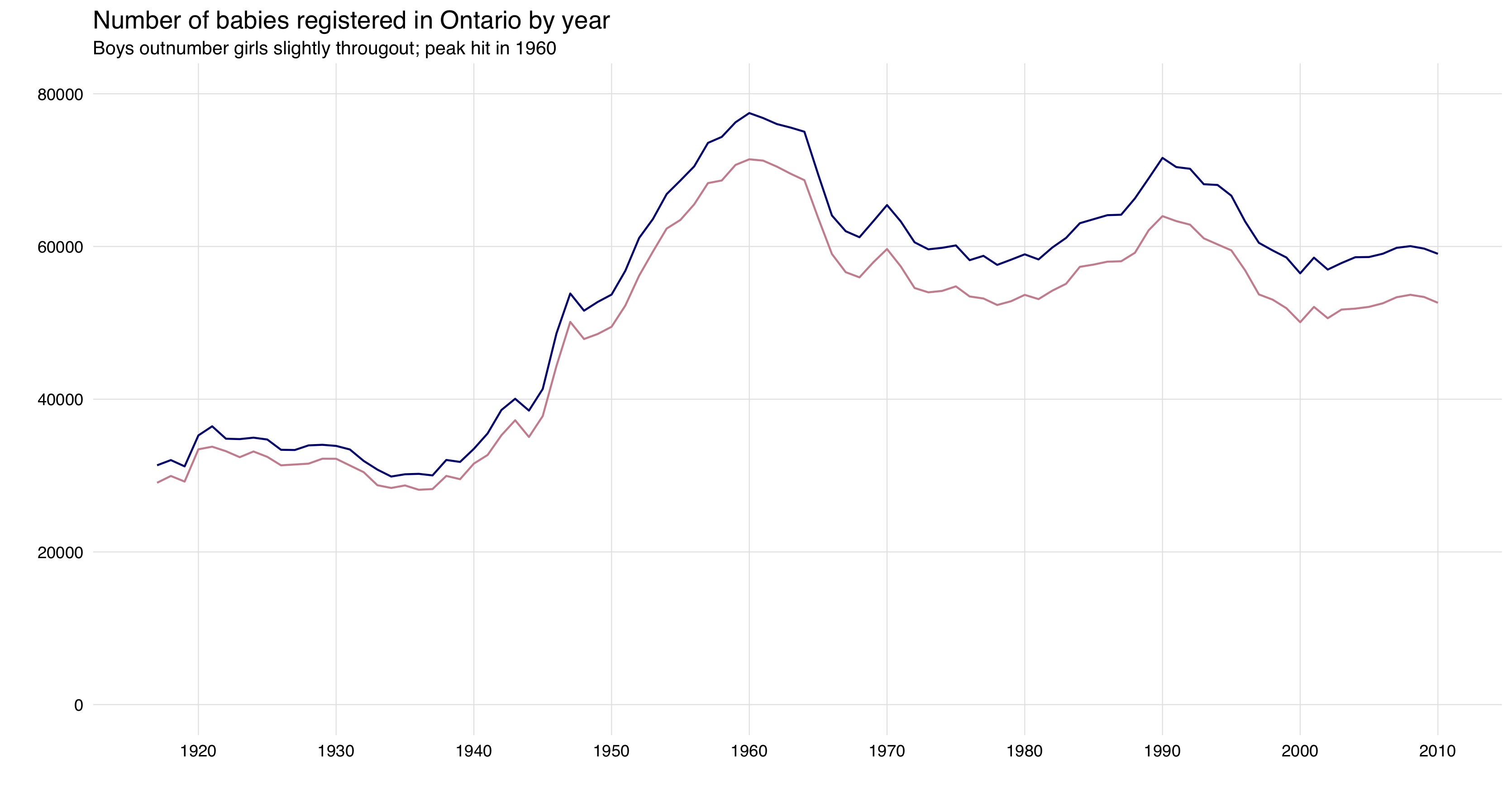 As we can see, the total number of births per year for both boys and girls peaked in 1960. While the number of registrations per year dropped after that, however, it doesn’t seem as if changes in the number of births per year would have been enough to drive the collapse seen in most of the names after 1960. My hunch is that some of this collapse is due to the fact that parents are selecting a broader range of names. The following plot, which shows the total number of unique names registered in a given year by gender, goes some of the way towards confirming that hunch:

Parents are choosing a broader range of names since at least 1950, and that increase accelerates after 1985.

One interesting way to see the impact of this is to visualize the most popular boys’ and girls’ names in each year. In general as time goes on, the most popular name is given to a smaller and smaller number of children. The solid line shows the total number of unique names per year. You might need to zoom a little to see the detail! 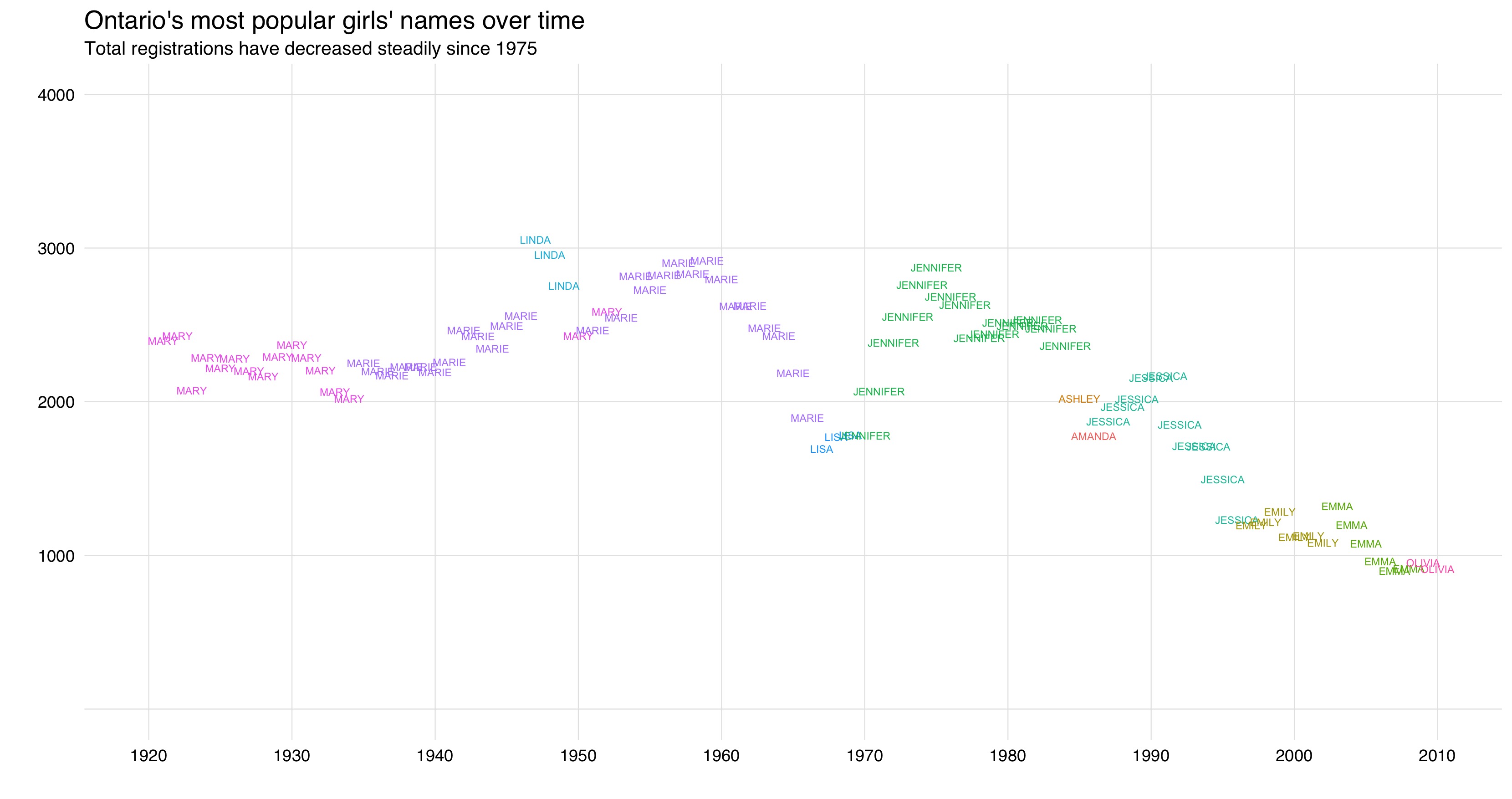 In the late 40s, Linda was given to over 3000 newborn girls; the most popular name in 2010, Olivia, was given to less than 1000. Aside from the trend towards smaller frequencies, this plot reveals some other fascinating info. Mary and Marie dominate the first half of the century, though Linda does top the charts for a few years in the late 40s. Ashley and Amanda are one hit wonders in the 80s. Emma – what a great name! – tops the charts for a fair number of years in the aughts, but year on year shows pretty rapid declines in the total number registered.

What about the boys? 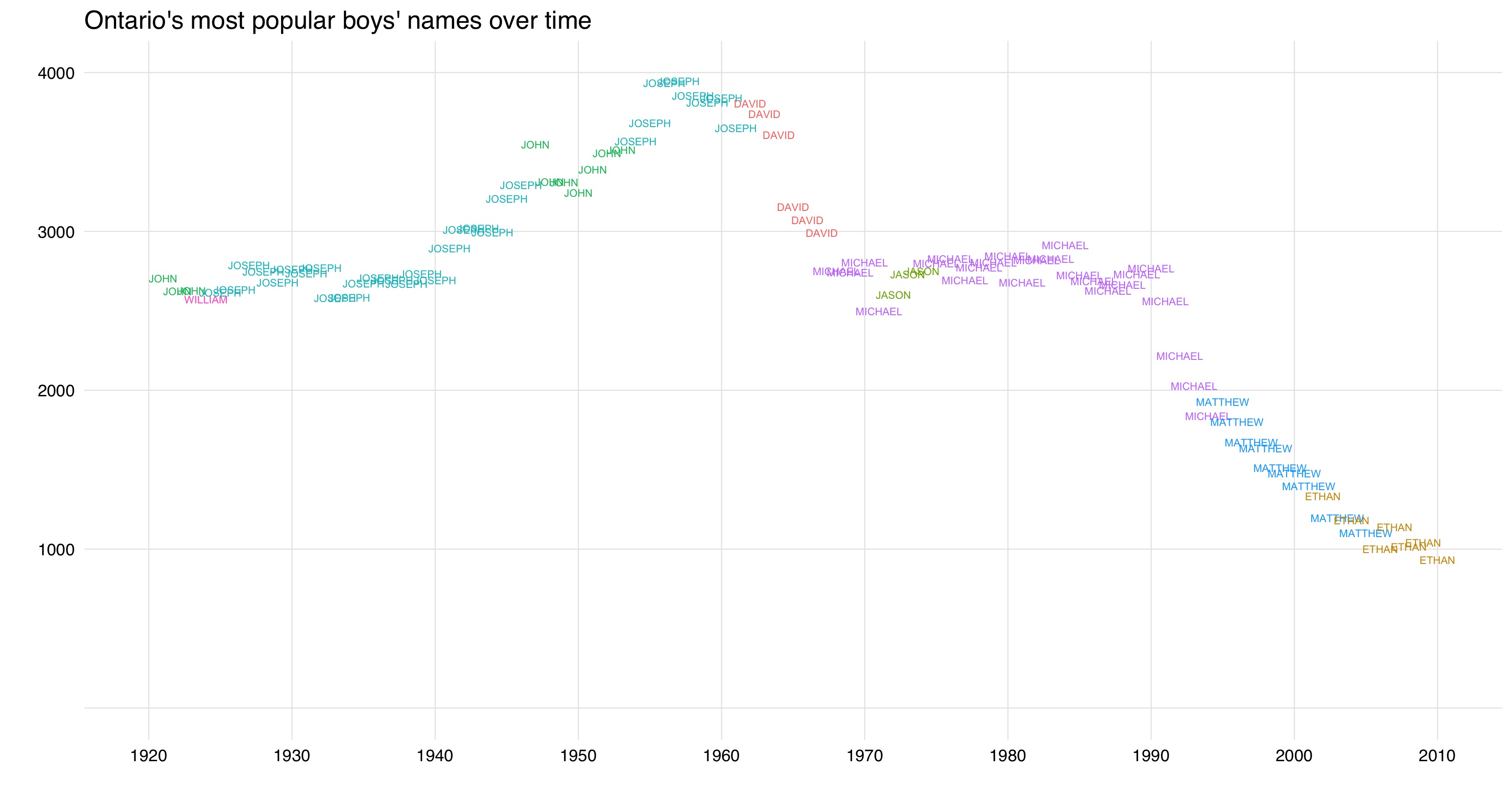 You can get the R code to produce the figures above here.